(This article is the seventh in the periodic Blue Water Trails series highlighting the floating, fishing and tourism opportunities on Kentucky’s streams and rivers).

FRANKFORT, Ky. – Deep in the geologic past, the rocks under the Inner Bluegrass Region lifted up and fractured. The uplift forced the ancestral Kentucky River into the breach. The waters flowed against and cut down into the rocks, forming the Kentucky River Palisades. 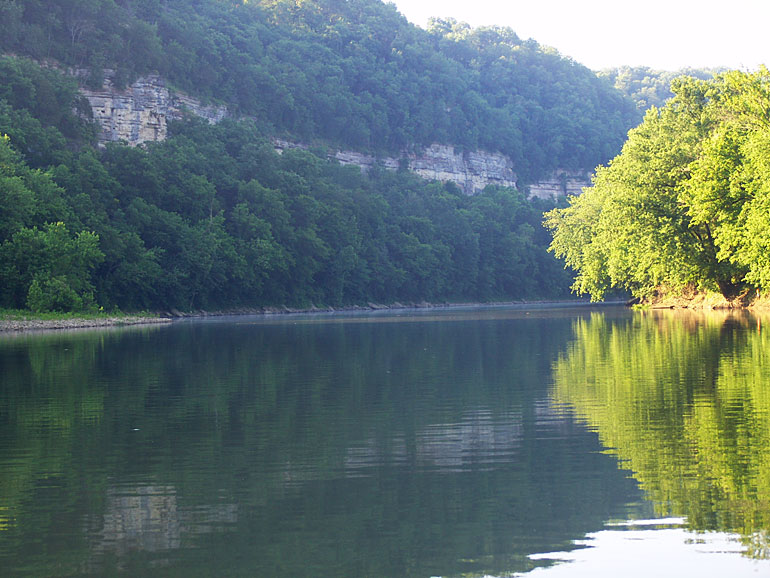 The Kentucky River Palisades formed ages ago and run from Boonesboro to Frankfort. The section of the Kentucky River just south of Lexington, Pool 9, is one of the best places to enjoy the beauty of these spectacular cliffs by floating the river in a canoe or kayak. This pool also has productive fishing for largemouth bass, bluegill, crappie and the occassional muskellunge.

The oldest exposed rocks in Kentucky occur at the foot of these incredibly scenic cliffs that run along the Kentucky River from Boonesborough to Frankfort. A float on Pool 9 of the Kentucky River, just south of Lexington, is the best way to experience the unique, towering beauty of the Kentucky River Palisades. You can also catch some muskellunge, black bass, crappie and bluegill on this 19-mile stretch of river.

The first float begins at the Ft. Boonesborough State Park boat ramp via KY 627 at exit 95 on I-75 in Madison County. This half day float concludes roughly 6 miles downstream at the Clays Ferry boat ramp, off KY 2328 (Old U.S. 25/421) in Fayette County beside the Riptides Restaurant and Bar. The former Clay’s Ferry Boat Ramp and Marina, located just downstream of the I-75 bridge, is no longer open to public use.

In summer, the Kentucky River runs placid and tranquil, perfect for beginning paddlers, families and fishing.

White and hybrid striped bass congregate below Lock and Dam 10 at Boonesborough, just upstream from the boat ramp. White shad-shaped soft plastic lures rigged on 1/4-ounce leadheads work well for these fish. White bass use this area the most in spring, while hybrid striped bass forage here in summer.

At the end of this rock ledge, the sternwheeler, The Brooklyn, met a crushing fate in the late 1980s. Built in 1903, The Brooklyn plied the Scioto River in Ohio and the Kanawha River in West Virginia before its trip to the Kentucky River. After an attempt to turn the old boat into a floating restaurant, the drought conditions in 1988 dropped the Kentucky River precipitously, and the rock ledge punched holes in the bottom of The Brooklyn. She sank where she was moored.

Magnificent palisades and the bridges for I-75 and old U.S. 25/421 come into view as you float downstream. Toward the end of this long straight stretch, Boone Creek enters the Kentucky River on the right just past a river level rock cliff.

A paddle up Boone Creek and into the lower Boone Creek gorge reveals a diminutive version how the Kentucky River once looked before the coming of the locks and dams in the 19th Century. Arching bluffs rise from Boone Creek and it seems you’ve entered a primeval forest, although Lexington is just 10 miles away as the crow flies.

The cool water of Boone Creek draws largemouth bass in summer. Largemouths lurk beneath the undercut banks craggy with roots found in the lower reach of the creek. A shallow running shad or crawfish-colored crankbait worked parallel to the banks draws strikes from largemouths, with potential for a fish in the 4-pound class.

Once you float under the old U.S. 25 (KY 2328) bridge, the take-out is on the right, just past the Riptides Restaurant and Bar. This also serves as the put-in for the float from Clay’s Ferry to Valley View.

This roughly 12-mile float takes considerable time, especially at summer low water levels when current on the Kentucky River is practically non-existent. Paddlers should be on the river early in the morning and expect to take out at dusk for this float.

After putting in at Clay’s Ferry, paddlers will see Bull Hell Cliff coming to view on the left. Legend says some early settlers lost a bull and it made its way to the edge of this cliff and eventually fell off it. They had a difficult time attempting to retrieve the bull, inspiring the cliff’s name.

Elk Lick Creek meets the Kentucky River about two miles downstream on the right. The river takes a hard bend to the left, exposing a tall palisade. The Floracliff State Nature Preserve lies just before the bend and Raven Run Nature Preserve is just after it.

The mouths of small tributaries on the Kentucky River offer good summer fishing. Crappie and bluegill lurk around fallen trees and root wads along with the occasional muskellunge. Largemouth bass hide in these structures as well. Rocky banks in the bends of the Kentucky River often hold smallmouth bass.

A high cliff known as Lover’s Leap comes into view downstream of Dry Branch and the take-out is about two miles downstream at Valley View, reached via KY 169 on either the Madison County or Fayette County side. The Valley View Ferry plies the river here. The ferry, established in 1795, is the longest continuously operating business in Kentucky.

Paddlers must pay close attention and not float past the take-out at Valley View as Lock and Dam 9 lies just downstream. Low-head dams such as this are extremely dangerous. If you see the old bridge piers from the long defunct Three Forks Railroad, also known as the Riney-B, you’ve floated too far.

Pool 9 will soon become the first recreational water trail on the Kentucky River in cooperation with Kentucky Riverkeeper and the National Park Service’s Rivers, Trails and Conservation Assistance Program. A kick-off event for the Kentucky River Water Trail will commence on National Trails Day, Sat. June. 4 at 11 a.m. at the Riptides Restaurant and Bar at the old U.S. 25/421 (KY 2328) Bridge in Fayette County. Boaters and Kentucky River enthusiasts are encouraged to attend. Contact Jennifer Haywood at 1-859-661-2539 for more information about this event.

Three Trees Canoe and Kayak Rental has canoes and kayaks for rent and runs shuttles. Floaters may camp at Ft. Boonesborough State Park or at hotels in nearby Richmond or Lexington.

Author Lee McClellan is an award-winning associate editor for Kentucky Afield magazine, the official publication of the Kentucky Department of Fish and Wildlife Resources. He is a life-long hunter and angler, with a passion for smallmouth bass fishing.

The Kentucky Department of Fish and Wildlife Resources manages, regulates, enforces and promotes responsible use of all fish and wildlife species, their habitats, public wildlife areas and waterways for the benefit of those resources and for public enjoyment. Kentucky Fish and Wildlife is an agency of the Tourism, Arts and Heritage Cabinet. For more information on the department, visit our website at fw.ky.gov.