FRANKFORT, Ky. – The season opens as spring days begin to warm, but the nightly chorus of the bullfrog is considered by many to be the song of summer.

Spend a night sloshing through ponds and creeks gigging bullfrogs and then fry up their meaty legs for breakfast with eggs and hash browns. You’ll then understand the allure of the season. 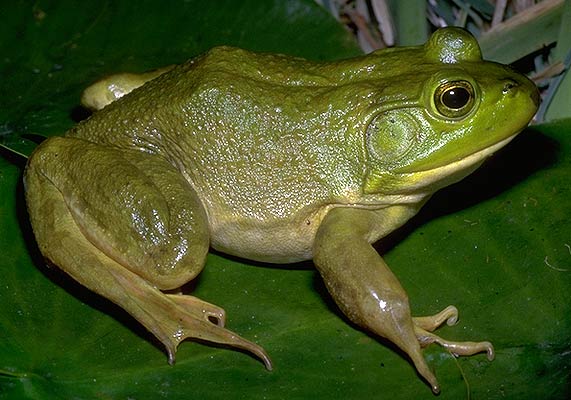 Bullfrog season opens May 20 and closes Oct. 31. Shallow weedy ponds, creeks, rivers and small lakes make excellent places to find bullfrogs. A platter of fried frog legs with potato salad, cole slaw and corn on the cob is a delicacy enjoyed by generations of Kentuckians. The daily bag limit is 15 bullfrogs.

Kentucky’s bullfrog season extends through five months of warm weather, opening on the third Friday in May, May 20 of this year, and running through Oct. 31.

The daily limit is 15 bullfrogs. By regulation, each day of taking bullfrogs begins at 12 noon and ends at 12 noon the following day.

It’s legal to take bullfrogs during daylight hours, but most “frog hunting” is done at night, when a strong light is used to locate bullfrogs at the water’s edge. They are typically taken from small boats or canoes or when wading.

In Kentucky, bullfrogs can be found practically everywhere there’s water, including small streams, big rivers and major reservoirs. They mostly flourish in the shallow waters of farm ponds, small lakes and wetlands.

The American Bullfrog (Rana catesbeiana) is native to the eastern and central United States, but has been widely introduced across North America and many countries around the world, including South Korea, Western Europe, Brazil, Columbia and Australia.

Bullfrogs primarily feed on insects, but it’s not uncommon for them to consume small snakes, snails, worms, fish or even other bullfrogs. Adults may have a body length of up to six inches with legs adding another seven to 10 inches.

They spend the cold weather months wherever they can get below the frost line. “Sometimes they burrow into the mud, or go in a muskrat hole,” said John Macgregor, state herpetologist for the Kentucky Department of Fish and Wildlife Resources. “They might even leave the pond and dig into the leaf litter, or find an old rotten log.”

Since bullfrogs breathe through their skin, it is possible for them to spend the winter underwater.

If bullfrogs are taken by gun or bow and arrow, a hunting license is required. Typically, bullfrogs are shot with .22 rifles, smoothbore .22s shooting birdshot or special arrows used in bowfishing.

If taken by pole and line, a fishing license is required. Dry flies, a single worm on a small hook, or even a piece of red cloth tied to a treble hook, are used to “catch” frogs by dangling the bait in front of their noses.

If bullfrogs are taken by gig or by hand, a hunting or fishing license is valid. It takes a quiet, stealthy approach, bright light and quick reflexes to grab a frog by hand.

Macgregor said the bullfrog breeding season is May through July, but that females can lay eggs as early as April and as late as August under ideal weather conditions.

The bullfrog’s distinctive deep call is partly “to lure females and to ward off other males,” said Macgregor. “Male bullfrogs are very territorial.”

It’s not hard to tell the two sexes apart. “Males have a huge ear drum (noted by a flat, green circle on the side of their head) which is much bigger than their eye,” said Macgregor.

Get out this season and poke around a pond in the middle of the night while enjoying one of Kentucky’s outdoor traditions. Plus, you get a delicacy to enjoy on table to boot.

Author Art Lander Jr. has been writing about the outdoors since the 1970s. He is a staff writer for Kentucky Afield Magazine.

The Kentucky Department of Fish and Wildlife Resources manages, regulates, enforces and promotes responsible use of all fish and wildlife species, their habitats, public wildlife areas and waterways for the benefit of those resources and for public enjoyment. Kentucky Fish and Wildlife is an agency of the Tourism, Arts and Heritage Cabinet. For more information on the department, visit our website at fw.ky.gov.