FRANKFORT, Ky. – My first shotgun was an old .410-gauge Mossberg with a bolt action and pistol grip that once belonged to my grandmother. A decent squirrel gun, yet working the bolt to get off three shots at incoming doves was nearly impossible for me when excited. Doves flying nearby had little to fear when I shouldered that old .410.

Many think a .410-gauge is a good beginner’s shotgun because of its lighter weight and reduced recoil, but in reality, it is the worst choice. 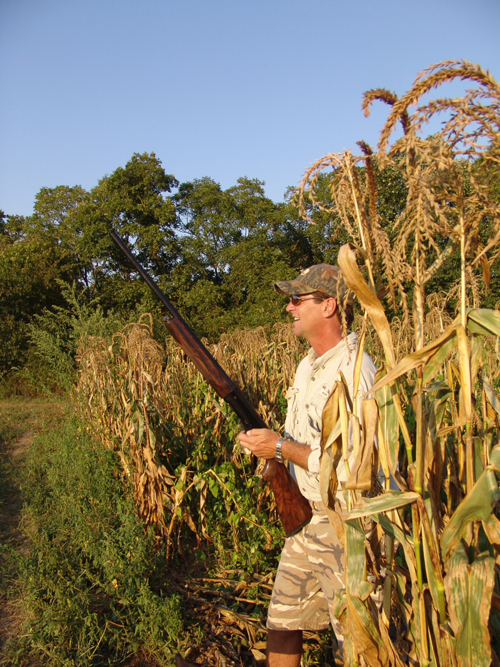 “I don’t recommend them for a first shotgun,” said Bill Balda, hunter education supervisor for the Kentucky Department of Fish and Wildlife Resources. “They are an expert’s gun. You are much better off with a 20-gauge semi-automatic. The semi-automatic action soaks up much of the recoil. You get much more shot in a 20-gauge shotshell.”

A single shot shotgun runs about $150 brand new, with used ones available at half that price. An average semi-automatic shotgun costs several times more than a single shot. Both though, with proper care, should last a lifetime. My grandmother’s .410 still shoots great today.

“Single shots are effective and they are good beginner guns,” Balda said. “Single shots are hinge actions and easy to use. They are safe to handle for beginners as they are easy to see if they are loaded. Even with a shotshell in it, the gun can’t go off with the action open.”

These attributes make single shots a good option for a youth hunter. A single shot also teaches young hunters shot discipline. You are much less likely to take impractical, out-of-range shots when you have just one try at the target.

“Single shots are lighter and easy to carry in the woods,” Balda said. However, the light weight brings with it more pronounced recoil or “kick.” Balda recommends a low recoil shotshell for single shots.

A pump-action shotgun, where the shooter manually pulls the action to cycle a shotshell, falls in price between single shots and semi-automatics. New ones from established manufacturers run roughly $300 – $400, but some from less well known manufacturers go for as little as $200.
“A pump is really reliable and almost any load will shoot in them,” Balda said. “I think as a first shotgun, they are a little much to keep up with from worrying about pumping the action for the next shot.”

Pump-action shotguns perform for decade after decade with routine maintenance. “They wear like iron,” Balda said. “If money is an issue, a pump is a good choice for a repeating shotgun.”
Proper fit is an important consideration for buying a first shotgun as well. “For the average person, length of pull is most important,” Balda said.

Most manufacturers offer youth model shotguns with shorter stocks. These make excellent choices for many female shooters as well. Don’t force a shooter to fit a certain shotgun, have the shotgun fit the shooter.

Also, mount the shotgun you are considering to your shoulder and place your cheek firmly on the gun stock as if ready to fire. “All you should see is the bead on the front of the barrel,” Balda said. “If you are having trouble with that, mount the gun higher on your shoulder.”
Consider these options for a first shotgun. The most important thing is the end result. “Look straight down the barrel at the target and paint it out of the sky,” Balda said.

-30-
The Kentucky Department of Fish and Wildlife Resources manages, regulates, enforces and promotes responsible use of all fish and wildlife species, their habitats, public wildlife areas and waterways for the benefit of those resources and for public enjoyment. Kentucky Fish and Wildlife is an agency of the Tourism, Arts and Heritage Cabinet. For more information on the department, visit our website at fw.ky.gov.