By Chris Erwin
Spring is like a flash in the pan, then the heat takes over and the fishing can get downright tough. The day heats up quick and the chances of catching good fish are quickly fading in the sweat that drips from your forehead as the days of spring seem like another time in the distant past. 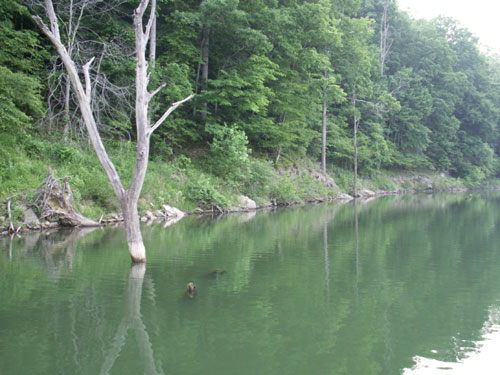 Before we all crawl off to find some air-conditioning, there is hope that you can still have a great day on the water and find fish even in the heat of the summer.

Over the 4th of July weekend I went to Cave Run Lake where we planned to attend my daughter’s birthday party, she was born on July 4th. Anytime I’m around the water I try to spend some time fishing and we knew it was going to be hot but that has never kept me from giving it a try anyway.

When you know that you are going to be facing the heat of the summer, it’s time to think about trying to build a pattern of fishing that reduces your time of randomly casting the banks and hoping that something may take your offering.

When we think about this time of the year – and I am talking about July and August – we know a few things, mostly that the fish are going to be in a post spawning stage. Therefore, we need to think about what these fish will be doing during this time.

When Bass come off the nest, they go through a short recovery period. As they recover, they start doing two things: they get hungry and then seek the easiest prey. On different lakes, this will spur different activity. On Cave Run this usually means chasing shad or cannibalizing hatchlings.
Armed with this knowledge and thinking about building a pattern, the first thing to do is try to locate shad and the hatched out spawns. As the summer progresses, the hatched out fry will become harder to find but the schools of shad will become easier to locate.

On this trip we found both.  We knew the fry were being drawn to the bank line in locations of old roadbeds, points and brush that were on flats which held 6 to 8 feet of water.

I’m sure they were other locations that held fish but when you’re building a pattern the objective is to eliminate as much water as you can. I don’t worry about every place that holds fish, instead I concentrate on the places I know fit the spots where I found fry and schooling shad.
The night before I tested my locations to confirm that the bass were indeed feeding on the fry and shad. After catching a few fish I came in and told my grandson Tyler we were going to hit it early the next morning. 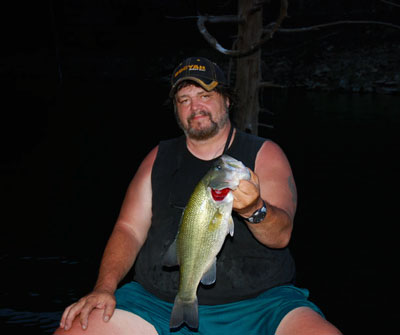 Testing the pattern, now we are ready!

By the way, Tyler is 16 and has become a good fisherman. There is no need to instruct him or even help him. All I had to do was find the fish and we would be able to have a little fun.

Sunday morning, we started our approach by heading to the first location that fit my assessment of what the fry were doing. In no time we were putting fish in the boat.  As soon as I felt we had covered the spot, I would fire up the motor and head to the next location.

After jumping to a few spots some other facts became apparent, these fish seem to want a white bait over other colors and they wanted it right on the bank. Missing the bank by two or three feet reduced our odds. The fish also wanted bait with a slow retrieve. 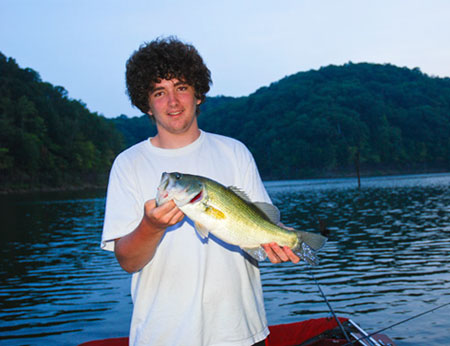 Grandson Tyler Thomas, the large mouth was a little over 19 inches

Remember, if you stay focused on why you caught each fish, the pattern will refine its self, and you can reduce wasted time.
In many locations, Tyler and I would both have fish on at the same time making the day one that both of us will remember for a very long time.

We don’t keep bass, so we count them and take pictures of our catch. Our self-imposed rules are simple, if it’s not at least 10” inches it doesn’t count and they have to make in the boat to count. If they get off before you touch them, they don’t count.

On Sunday July 3, we caught 60 bass together using this pattern. We covered some 14 miles of the Licking River only fishing short areas that fit our criteria. Almost every strip of the bank produced.

Along with keeping our eye on breaking fish that we could see chasing shad – about six of the fish came from breaking fish –  a little over 30 of the fish were below the slot. The slot on Cave Run is 13 to 16 inches, while the balance was in the slot or over the slot.

The largest fish was 21 inches, followed by a pair of 19 inch fish. Another seven were over the 16 inch mark. All made for a good day, by almost anyone’s measure, especially in the hot days of summer. 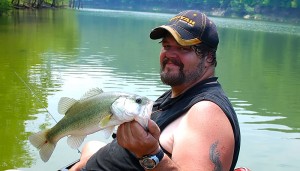 Just to recap, let me say that we also reduced our line weight to 14 pounds. Most of the time when the musky are in play I use at least 25 pound test but when the water temperature reaches 80 degrees, I quit trying to catch musky because of the high mortality rate. Musky die quickly in the heat of the summer and I do my best not to kill these fish.

The 14 pound test line also lets your crank bait dive deeper when retrieved. This can be a factor when casting breaking fish or if fish happen to be on the second break of the shore line. Some points and road beds have a second break and we found that some of the larger fish were staging on this break, which was about six feet deep.

While we were moving from one location to another Tyler decided to throw a few crappie jigs. Many of the flats were holding new brush and down trees from all the storms and wind this spring, which has change much of the landscape of the river. 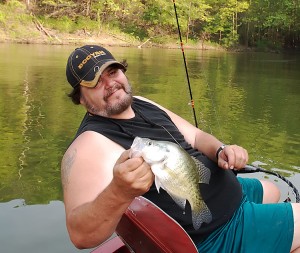 This proved to be very productive. We found good white crappie in the tops of these down trees casting our small 1/8 oz. twister tail jigs. We caught many crappie and some of the largest bluegill we have seen on this lake in a long time.

The entire day was a fun packed. It may have been hot, but a few quick leaps in to the water sure took the edge off the heat while we continued to hunt these summer time bass. 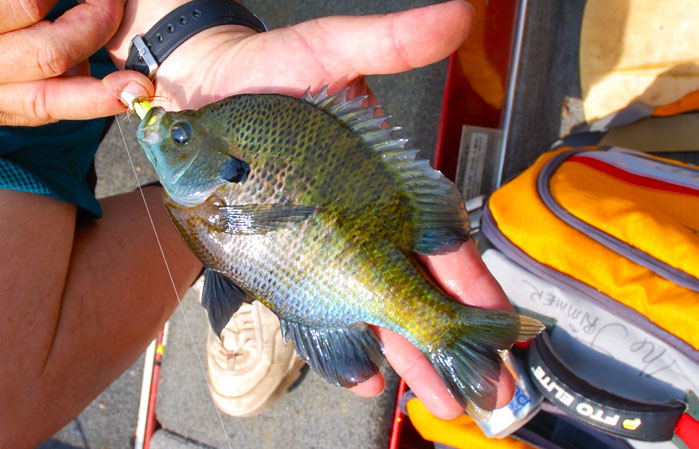 Cave Run has been through its highest flood stage this year reaching over 30 feet above summer pool this may have had some factor in what the fish are doing now.

If you’re looking for a good chance to catch bass during what is arguably the toughest time of the regular fishing season, you might want to plan a trip to Cave Run Lake.

Chris Erwin Can be reached by sending email to trimmer308@windstream.net
Till Next Time
Good Fishing!

2 comments for “Crank-Baits in the Summer Heat”