FRANKFORT, Ky. (April 19, 2018) – This spring seems like one long continuation of late winter. As soon as we get a warm day, the temperature plunges and we are back in February again. It even snowed on Monday of the third week of April. 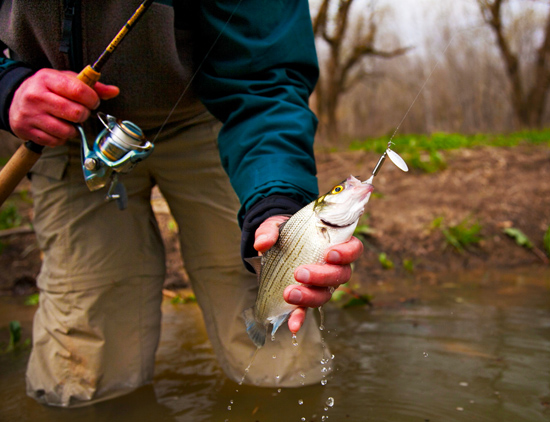 In-line spinners fool white bass during their spawning runs, like this silver one did a few years ago in the headwaters of Taylorsville Lake. The up and down temperatures this spring stunted the white bass runs, but they should be make their heavy spawning moves into the headwaters of reservoirs soon with the arrival of sustained warm weather.

This up and down weather combined with cold rains has the spring fishing season behind by a few weeks. The spawning runs of white bass into the headwaters of reservoirs are scattershot so far this spring, with some movement followed by retreat.

“I don’t think the white bass have really had a chance to run yet,” said Ron Brooks, director of Fisheries for the Kentucky Department of Fish and Wildlife Resources. “I think the fluctuating water temperatures are screwing them up a bit. We need a sustained warm front to get them going.”
Water temperatures are in the low 50s in most reservoirs and streams across Kentucky.

Anglers fishing the headwaters of Taylorsville Lake found rewarding, but sporadic, fishing over the last week. “Last Thursday, I took home six white bass, but on Friday, I took home 10, at least four of them over 15 inches,” said Clifford Scott, internal policy analyst for Kentucky Fish and Wildlife. “I had to walk quietly out of there because I had the biggest stringer of fish.”

Scott took his fish with a combination of old-school 2-inch curly-tailed grubs in white and yellow along with a 2-inch Bobby Garland Baby Shad in pink and pearl.

“I saw small shad all over the place,” Scott said. “Once I saw them, I switched to the Baby Shad. You had to fish for the white bass, they were not on a hard run, but produced enough action to keep your interest.”
The upper part of Taylorsville Lake WMA grants bank access to anglers that produces fishing comparable to those in boats.

Mike Hardin, assistant director of Fisheries, caught some white bass in the upper reaches of Taylorsville Lake this past weekend. “We caught them above the first riffle from the impounded water,” he said. “We caught a mixed bag of different sizes and caught more in the evening than in the morning. The males were marked up in breeding colors. We caught a few females, so they are already staging for the spawn.”

White bass populations are by nature cyclic, and good fishing often erupts in lakes over the course of a year or two.

Green River Lake is one of those lakes poised for a white bass breakout. Southwestern Fisheries District biologist Eric Cummins and crew conducted white bass population sampling on the lake last year. They found excellent reproduction in 2014 for white bass, producing an expanding population of fish 14 inches and longer in the lake.

Last week, some bass anglers fishing a tournament on Green River Lake reported incidental catches of white bass while fishing crankbaits for largemouth bass. Anglers should search the Robinson Creek arm from Wilson Creek up to the KY 76 Bridge (Knifley Road) and in the Green River arm above Holmes Bend.

Cave Run Lake is another reservoir with growing numbers of white bass. Population surveys conducted in 2017 show high numbers of larger fish, which should mean good fishing in 2018. Search for surface activity to find white bass in spring on the lake.

The fishing peaks in summer on Cave Run, when white bass get in the “jumps” by trapping shad against the surface and ripping through them. The confluence near the mouth of Buck Creek as well as the areas around the Clay Lick and Alfrey boat ramps make excellent places to search for them when it gets hot. Any shad imitating topwater cast into the jumps will get smoked.
Some anglers caught fish in the Broad Ford area in the headwaters of Nolin River Lake a few weeks ago, but the fishing slowed with the cold rains that accompanied major frontal passages earlier in April. The sustained warm weather in the upcoming forecast will draw waves of white bass into Nolin River Lake above Bacon Creek Ramp.

Fast and furious fishing during the spring runs makes white bass one of the most popular fish anglers pursue. When they are on, you can catch several fish on consecutive casts.

In-line spinners like the venerable Rooster Tail in white, chartreuse and pink all score white bass. You can work an in-line spinner near the surface or let it sink a few feet and retrieve. Vary the depths of the retrieve until you hit fish.

Like what Scott found last week, small shad-shaped soft plastic lures or curly tailed grubs also attract white bass. Some anglers fishing the headwaters of reservoirs suspend 1/16- to 1/32-ounce white feather or hair jigs under bobbers and let them drift in the current. Change the depth of the jig until you find white bass.

Anglers may keep 15 white bass daily, but only five of the daily limit may be longer than 15 inches. White bass fishing gives you a fantastic reason to buy your fishing license, so don’t forget to get one if you haven’t already.