Twenty years ago this December, seven elk were released atop Potato Knob in Perry County in front of thousands of onlookers. The landmark restoration of a free roaming elk herd in Kentucky was off and running. 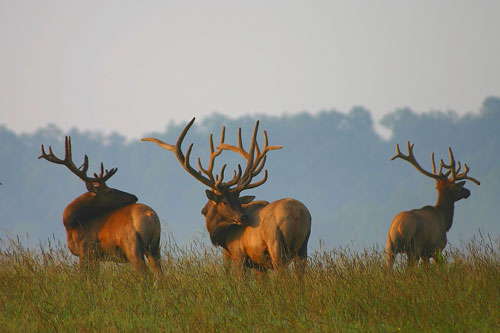 The elk quota hunt deadline is midnight on Sunday, April 30. Last year, 68 percent of hunters who were drawn and purchased their elk permit filled their tags.

Fast forward to present day. There are now more elk in Kentucky than any state east of the Rocky Mountains and each year the prospect of harvesting one compels tens of thousands of hunters to apply for Kentucky’s quota elk hunts.
Those interested in applying for 2017 should not delay. Applications must be submitted online at fw.ky.gov by midnight (Eastern time) April 30.

“For the person who has always wanted to elk hunt but just couldn’t afford to hunt out west, consider applying for a Kentucky elk quota hunt,” said Gabe Jenkins, elk program coordinator for the Kentucky Department of Fish and Wildlife Resources. “Our application and permit costs are low in comparison and our elk hunters enjoy some of the highest success rates in the country.”

Kentucky residents and those living out of state can apply for each of the four permit types – bull or cow firearms and bull or cow archery/crossbow – but can be drawn for one hunting permit only. Each entry costs $10. Applicants for the youth-only hunt can put in for the regular elk quota hunts as well but cannot be drawn for both in the same year.

This year, Kentucky Fish and Wildlife will issue 700 general quota hunt permits and 10 youth permits. The permit breakdown will be 100 bull archery and crossbow permits, 150 bull firearms permits, 160 cow archery and crossbow permits and 290 cow firearms permits. Youth permits are valid for use for either sex during all elk seasons.
At least 90 percent of the available elk quota hunt permits go to Kentucky residents. Last year, Kentucky Fish and Wildlife received almost 75,000 applications from more than 34,000 applicants. Kentucky residents alone submitted 46,365 applications.
Sixty-eight percent of hunters who were drawn and purchased their elk permit for the 2016-17 season filled their tags.

Bull elk hunters enjoyed the highest rate of success among drawn elk hunters last year. Eighty-one percent filled their tags and 70 percent of hunters utilizing archery and crossbow equipment successfully harvested a bull. The success rate for cow elk was 35 percent for archery and crossbow hunters and 67 percent among hunters using a firearm.
“A drawn hunter isn’t guaranteed an elk but a little planning goes a long way,” Jenkins said. “Whether you’re a do-it-yourselfer or hire a guide, putting in the time and effort goes a long way and increases your chances of success.”

The bull archery/crossbow seasons open in September and the cow archery/crossbow seasons open in October. Each runs through Dec. 31. However, hunters drawn for a cow or bull elk archery/crossbow permit cannot hunt when an elk firearms season is open.
Applicants’ names will be drawn at random by the Commonwealth Office of Technology (COT) in May and randomly assigned a permit type based on their application choices. Hunters drawn for an elk hunting permit are blocked from re-applying for three years.
While waiting to learn if you’ve been drawn, explore Kentucky Fish and Wildlife’s website. It offers information about the basics of elk hunting in Kentucky as well as a newer featured called Kentucky Elk University. Designed to educate hunters of all experience levels, this online tutorial covers preparations before an elk hunt, what to expect in the field and what to do after the shot.
EARLY RETURNS: The 2017 spring youth turkey season ended April 2 with hunters reporting a harvest of 1,693 birds.

The youth-only weekend precedes the opening of the 23-day general statewide spring turkey season. This year, the general season opens Saturday, April 15.
AN OUNCE OF PREVENTION: With spring now in full bloom across Kentucky, it’s important to remember to guard against tick bites if you plan to be on their turf.

This means minimizing the amount of exposed skin by tucking pants legs into socks or boots and tucking in your shirt, utilizing repellents containing 20 to 30 percent DEET per the directions on the label and checking your clothing and body after being in wooded and brushy areas and areas with tall grass.

Consider treating clothing and boots with a product containing Permethrin, an insecticide that kills ticks, mosquitos and other pests, but allow any articles treated with Permethrin to dry completely before wearing. One treatment can protect through multiple washings.

Should you find a tick attached, grab the tick with tweezers as close to the skin’s surface as possible and steadily pull straight back to remove. Afterward, clean the area around the bite and wash your hands.