ASHLAND – June 17, 2011– KentuckyAngling.com is undergoing a transformation, expanding both its staff and editorial mission.

A writer and photographer, Carrie Stambaugh is a former award-winning local newspaper reporter and an experienced hiker, canoeist and burgeoning angler.

With Stambaugh onboard, KentuckyAngling.com has begun offering a broader range of news, feature stories and information for outdoorsmen. Look for updates on local hiking trails, paddling sports and other outdoor adventure options in the coming weeks and months.

Erwin said KentuckyAngling.com will remain dedicated to providing up-to-date fishing conditions on 28 Kentucky lakes and rivers in addition to tournament results, wildlife and hunting news on both its magazine page and popular forum page. The magazine’s mission is simple, according to Erwin, “We want to make you a better fisherman, along with giving you the most up to date information about what Kentucky and surrounding states has to offer the outdoorsman.”

KentuckyAngling.com was founded in 2002 by Erwin, an experienced tournament fisherman and Cave Run guide. The site has since become a popular destination for local and out-of-area fisherman to get the latest fishing conditions, find new destinations or pick up a few secrets to help hook the big one. The site averages more than 30,000 views a month.

KentuckyAngling.com is a proud member of the Kentucky Outdoor Press Association. Erwin is the organization’s secretary and Stambaugh is its newest member. 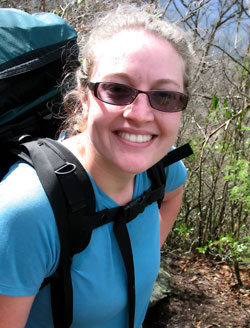 Bio: Carrie Kirschner Stambaugh
Carrie Kirschner Stambaugh has worked as a journalist in eastern Kentucky since the beginning her career. Before becoming the managing editor of KentuckyAngling.com, Carrie spent five years as a staff reporter at The Independent in Ashland, and previously worked in Pikeville for the Appalachian News-Express. For the last year she has also worked as an independent freelance writer and photographer.
Her work has been recently published in more than a dozen regional newspapers, magazines, online magazines and press membership publications.
She has written about a wide range of issues including: government and politics, agriculture, crime, breaking news, business, legislation and environmental and outdoor issues. Carrie has researched and produced a number of award-winning series on infrastructure, political corruption and environmental issues.
As a newspaper reporter, Carrie was frequently recognized by the Kentucky Press Association. She has won a number of KPA’s Excellence in Kentucky Newspapers Awards. Most recently, she took first place honors for best investigative series or story and best enterprise or analytical story in the daily class 2 division.
She is a member of the Kentucky Outdoor Press Association and Ashland Alliance Young Professionals. She also volunteers as a Big Sister with the Big Brother Big Sisters of the Tri-State and serves on the Summer Motion Committee.
Carrie studied journalism, political science and political communications at Ohio University, attending the prestigious E.W. Scripps School of Journalism, where she also worked as a student journalist for The Athens News. A native of Cincinnati, Ohio, she attended Sycamore High School where she was an All-American athlete.
Carrie is married to Carl A. Stambaugh, an engineer with the Ashland Fire Department and partner in Rescue Pro LLC., a confined space rescue services company.
The couple resides in Ashland and are avid outdoor adventurers, paddling, hiking and fishing across Appalachia. In 2010, the couple spent 4 months hiking The Appalachian Trail from its southern terminus in Georgia to southern New York.