When important information is sent to me I always try to keep you informed and I know in our area anything to do with the Second Amendment is a subject that you may be interested in.
Senator Robin Webb is co-chairmen for the Sportsmen Caucus and I wanted to pass along this news release from her office. 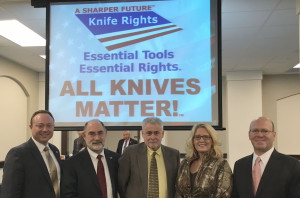 The Kentucky Legislative Sportsmen’s Caucus held its first meeting of the 2016 Legislative Session this week in Frankfort. The caucus, co-chaired by Senator Robin Webb, D-Grayson, and Rep. Tommy Turner, R-Somerset, is composed of almost 100 legislators representing the interest of Kentucky’s hunters and anglers.

“One of our roles as a caucus is to protect our Second Amendment rights,” said Senator Webb. “Knife rights fall under the Second Amendment and some of us fear that those rights are at risk.”
Approximately 60 legislators and others interested in sportsmen issues, including Daniel Hall with the National Rifle Association and Kentucky Fish and Wildlife Commissioner Greg Johnson, attended the bi-partisan meeting.

“I am honored to serve as co-chair of the Kentucky caucus, along with Rep. Turner,” said Senator Webb. “When I speak out in support of an issue – or Rep. Turner speaks in support of an issue – we are only one voice. As a caucus, we are many voices and we are able to spread our message farther. As a group, we are not only able to reach more people, but we can share ideas and work together to reach common goals.

“The caucus allows us to come together as sportsmen and women – not as Democrats or Republicans. We leave our political affiliations at the door so that we can focus on what is best for Kentucky’s sports enthusiasts,” added Webb.

“We, as sportsmen, must stand united now more than ever, as our rights to hunt and fish are constantly under attack,” Rep. Turner said. “I am honored to serve as co-chair with Senator Webb and look forward to what our caucus will accomplish.”

More News:
In other news, I wanted to let you know that my good friend Art Shultise and Lou Kornman will be appearing on Kentucky Afield TV over the weekend. Shultise is the inventor and producer of the AC Shiner lure company.

Now at 86 years old, he continues to make one of the best fishing lures on the market today. The last time I talked to him he was talking about retiring so it will be interesting to see what he has to say to Tim Farmer.

Another guest, Lou Kornman is also a friend I got to know back in the 80s. Kornman was the 8th district wildlife biologist back when Cave Run Lake was first built, and it was him that started the Muskie program in the state of Kentucky.

While we have had two biologists who have succeeded Kornman, and the Muskie program has changed its focus to a large degree. It was Kornman that established what has been a great fishery in Kentucky. His interview should be interesting to watch.

The program will air Saturday at 8:30 p.m. EST and will repeat Sunday at 4:30 p.m. on KET 1. Since this paper will not hit the stands until after this program airs you don’t have to miss it.

You can go to http://video.ket.org/show/kentucky-afield/ and watch the full episode on demand, this episode will be for 01/23/16, which should be the first one you see, it is free and streams in HD.

Chris Erwin is the author of Camping Kentucky, and founder and publisher of Kentucky Angling News an on-line magazine available at www.kentuckyangling.com/magazine. Chris can be reached by email chris@ashlandbeacon.com