Shredded bark on saplings, fresh scrapes along old logging trails and trail camera snapshots of passing bucks are encouraging signs that deer activity is picking up across Kentucky and just in time. 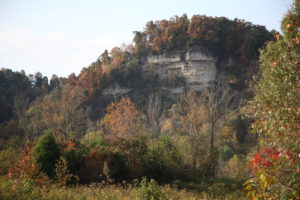 The statewide modern firearm deer season opens Nov. 12 this year. Arguably the most widely anticipated of the fall hunting opportunities, it’s structured to coincide with the peak of fall breeding, known as the rut.

“Deer are going to be moving,” said Gabe Jenkins, deer program coordinator with the Kentucky Department of Fish and Wildlife Resources.

This year, the modern firearm season runs through Nov. 27 in counties assigned by Kentucky Fish and Wildlife to Zone 1 or 2 and through Nov. 21 in Zone 3 and 4 counties.
Hunter success during modern gun season heavily influences the state’s annual deer harvest as evidenced last year when it accounted for 70 percent of a record overall harvest of 155,734 deer.

The harvest is down through the first two months of the 2016-17 season, but wildlife biologists aren’t alarmed. The herd is healthy and its population is robust. Hunter success has been affected by the unseasonably warm weather and windy conditions combined with the abundance of food on the landscape.
“Between the October full moon and the acorns and the heat, it’s just not been ideal,” Jenkins said.

He strikes a more hopeful tone for the modern firearms season.
“If the weather cools off and is favorable we’ll see an uptick and some harvest,” he said.

Hunters reported taking more than 17,500 deer across the months of September and October. In recent days, archery hunters have found success by taking up positions where food and water sources and bedding areas can be found in close proximity.
Daytime activity is expected to increase in the coming week.

“My biggest thing right now is going to be planning,” Jenkins said. “If I was hunting right now, I’d be on rub lines and scrapes for the next week. Then, over and around the food sources. After that, I’m going to be using pinch points and saddles and hunting the timber as much as I can if there are acorns. If you don’t have acorns and you’ve got something green that’s where I would be. If you were able to get a food plot in and it’s green, that would be a good place as well.”

Check It Out: Hunters longing for more public land in the Bluegrass Region on which to hunt deer with modern firearms have a new destination to consider – Rolling Fork WMA in Nelson and LaRue counties. Each county is classified as Zone 1.

The almost 2,900-acre property is dissected by the Rolling Fork River and showcases the unique geography of the Knobs. The area consists of upland and bottomland fields and the steep, wooded slopes are fairly rugged.

“I know some people who have had hunting leases on adjoining property and they’ve been chomping at the bit because they know what’s on the WMA property,” said Tony Wheatley, land acquisition coordinator for Kentucky Fish and Wildlife.

There are three parking areas on the Nelson County side and five more on the LaRue County side. Access beyond these points is by foot travel only. A map of the area is available online by entering “Rolling Fork WMA” in the search box on the department’s homepage at fw.ky.gov.

Telecheck Reminder: All harvested deer must be reported to Kentucky Fish and Wildlife either by phone at 1-800-245-4263 or online telecheck at fw.ky.gov.
New this year, hunters checking an antlerless male deer will be asked to distinguish it as a male fawn – also known as a button buck – or as an adult that has shed its antlers.

Hunters checking an antlered deer will be asked to enter the total number of antler points measuring 1 inch or longer and indicate if the outside antler spread is greater or less than 11 inches. The outside spread is the widest distance between the outside of the main beam antlers.

Callers who do not have the required information will be asked to call back once they have the information in order to complete the telecheck process and receive a confirmation number.

Answers to Your Questions: Kentucky Afield’s fall hunting call-in show will air live on Kentucky Educational Television (KET) starting at 8:30 p.m. on Nov. 12. Wildlife biologists with Kentucky Fish and Wildlife and a representative from the department’s Law Enforcement division will join host Chad Miles on set for the one-hour show.
The Kentucky Hunting and Trapping Guide also holds answers to many questions about hunting deer in the state. The guide lists season dates, summarizes regulations and provides information about licensing and permit requirements, zone changes, public lands hunting and much more. It is available on the department’s website and wherever licenses are sold.

Wildfire Risk Increasing: Parts of Kentucky have slipped into a moderate drought and the forest floor is littered with brittle leaves, twigs and other fuel for potential forest fires. It’s something to be mindful about when setting up deer camp.
The fire danger rating for the Daniel Boone National Forest has been “very high” this week. Several recent fires in the national forest started from campfires that were not put out completely before leaving the fire unattended, according to a news release from the U.S. Forest Service.