(Feb. 15, 2018) – A reduction in the statewide daily creel limit from 30 fish to 20 fish for crappie highlights the new fishing regulations for 2018. The regulations go into effect March 1. 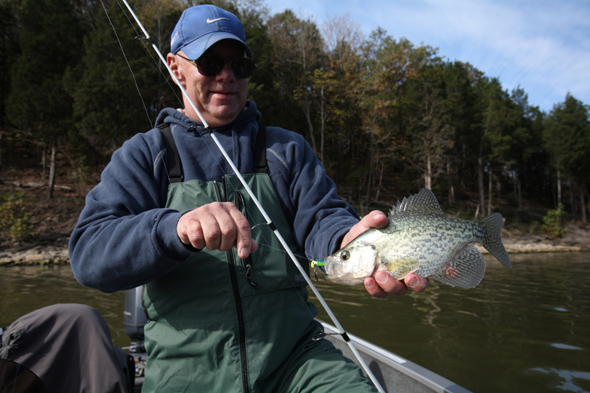 Tim Slone, retired director of the Information and Education Division of the Kentucky Department of Fish and Wildlife Resources, holds a black crappie caught from Taylorsville Lake. The increase in the minimum size limit to 10 inches for crappie on Taylorsville Lake is one of several new fishing regulations for 2018 that anglers must know before fishing this spring.

“Anglers requested this regulation,” said Ron Brooks, director of Fisheries for the Kentucky Department of Fish and Wildlife Resources. “The amount of hours spent crappie fishing and the fishing pressure on crappie are increasing across the state. Crappie are popular to eat. Crappie anglers recognized the increase in fishing pressure and requested this regulation to protect the resource.”

“When we stock brown trout, we hope they hold over to the next year at least,” Brooks said. “We only put them in streams where they have a chance to hold over and grow bigger. They are not a put-and-take opportunity. This regulation should help the size structure improve on brown trout.”

There is no minimum size limit on the statewide regulations for rainbow trout.

For blue and channel catfish on Barren River Lake, there will be a 15-fish daily creel limit with only one of those fish may be longer than 25 inches. “We are trying to establish a trophy fishery for these lakes,” Brooks said. “That is why we are stocking blue catfish. We hope to establish a self-sustaining population.”

Other new regulations deal with the Fishing in Neighborhoods (FINs) program. Possession or use of live shad will be prohibited on all FINs lakes. In addition, Southland Christian Church Lake, a 2.6-acre lake in Jessamine County, is now enrolled in the FINs program.

Other special regulations for 2018 affect Beech Fork Reservoir, also known as Staunton Reservoir, in Powell County and Willisburg Park Pond in Washington County. Beginning March 1, there will be a 15-inch minimum size limit for largemouth bass and a 15-fish daily creel limit on bluegill on Beech Fork Reservoir.

Also on March 1, anglers may use dip nets to collect baitfish statewide.

Anglers should remember the current license year expires Feb. 28. Anglers fishing after this date must purchase their 2018-2019 fishing license.

Warm winds will soon blow across Kentucky, driving anglers to the water. Keep these new regulations in mind when fishing this spring.