Kentucky is drawing national attention after dramatically improving the accuracy of harvest and participation information collected from its waterfowl and migratory bird hunters. 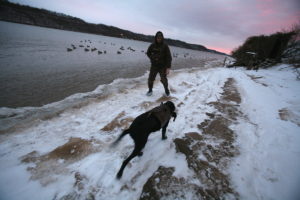 Kentucky is garnering positive national attention for dramatic improvement in the accuracy and reliability of harvest data for migratory birds such as doves, ducks and geese through implementation of the online Harvest Information Program, or HIP, in 2015. The system is under consideration for use on a national level.

The Harvest Information Program (HIP) provides state and federal biologists with data to generate reliable estimates of migratory bird hunter activity and harvest. The estimates are used to help shape season dates, bag limits and population management.
In the past, Kentucky’s data left much to be desired. But a new report from the U.S. Fish and Wildlife Service shows that requiring waterfowl and migratory bird hunters to fill out the HIP survey on the Kentucky Department of Fish and Wildlife Resources’ website is having the desired effect.

Kentucky’s data is better than ever. Because of its success, the state’s system is being considered for implementation on a national level.

The department shifted the HIP survey online in 2015. Waterfowl and migratory bird hunters fill it out through the “My Profile” feature at fw.ky.gov. The survey asks the hunter if they plan to hunt doves, ducks, geese, woodcock or other migratory birds during the current license year. If the respondent hunted those species the previous license year, they are asked to provide additional information about the number of each species harvested. The survey takes about 5 minutes to complete and is a requirement in order to legally hunt waterfowl and migratory birds in Kentucky.
The U.S. Fish and Wildlife Service report looks at migratory bird hunter activity and harvest during the 2014-15 and 2015-16 seasons and shows big improvements in the accuracy of Kentucky’s estimates.

“We went from one of the worst levels of precision in the country to one of the very best,” Brunjes said.

Improvements were seen across the board. The duck and goose estimates illustrate the significant gains in accuracy after the HIP survey went online.

“Now, when somebody asks me, how many wood duck hunters do you have or how many dove hunters do you have, I have some confidence in answering that question. How many ducks did we shoot in Kentucky last year? We shot about 120,000 versus we shot somewhere between 50,000 and 200,000.”