PAINTSVILLE – For nearly 100 years, the Dawkins Line helped to fuel the local economy by hauling out natural resources from the hills of Johnson, Magoffin and Breathitt Counties.

Soon, the abandoned line could again prime the region’s economic engine by carrying visitors on foot, horseback and bike into the region to experience rather than extract its rich natural wealth.

If completed, the 36-mile long Dawkins Line will be Kentucky’s longest Rails to Trails project, quadrupling the current mileage of completed rail-trails in the state. Supporters say the Dawkins Line will not only bring tourist dollars to the area but will provide a valuable, recreational facility for residents in an area plagued by obesity, diabetes and heart and vascular disease.

But opponents – mostly property owners along the rail line – argue the Dawkins line is not the best place for a recreational trail and are vowing to stop it in its tracks. 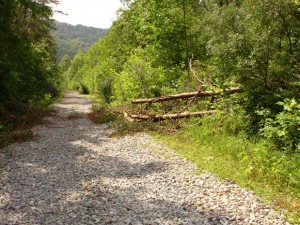 Photo courtesy of Summit Engineering. A heavily wooded section of the Dawkins Trail near its Evanston terminus in Breathitt County.

A public meeting, aimed at gathering input and sharing information about trail is planned on Tuesday, Aug. 30 at 7 p.m. in the Country Music Highway Museum in Paintsville and is likely be well attended.

The Dawkins Line, which stretches from West Van Lear in Johnson County just past Evanston in Breathitt County, is named for the former Dawkins Lumber Company. The company began building the line after incorporating the Big Sandy and Kentucky River Railroads in 1912, according to a trail feasibility study compiled by Summit Engineering in 2007. The study, titled The Big Lovely Mountain Trail, was commissioned and paid for by the Kentucky Rails to Trails Council and is available online.

In 1930 following the stock market crash of 1931 the line, which had not been completed, was acquired by the C&O Railroad. It eventually extended the line into Breathitt County and to Evanston in the late 40s. The railroad continued to haul lumber and later coal, even as it changed ownership as railroads consolidated over the next 60 years. CSX Transportation sold the line to its last private owner R.J. Corman in 2002. Corman filed paperwork to abandon the line in 2004.

At that time, the Kentucky Rails to Trails Council, which advocates for the development of trails in Kentucky, became aware of Corman’s intent and was able to railbank the line, said Chairman Keith Lovan said.

Railbanking is the process established by state and federal laws, in which an abandoned railroads’ right-of-way is allowed to remain intact so that a recreational trail can be developed, Lovan said. 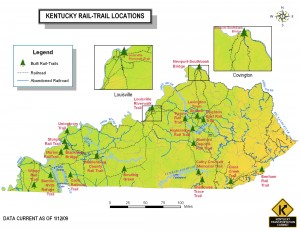 Map courtesy of the Kentucky Transportation Cabinet includes railroad lines in Kentucky as well as established Rail-Trails and abandoned lines.

Otherwise, when a railroad line is abandoned its right-of-way reverts back to individual property owners, who can then refuse to allow use of their land for a trail. Railbanking is a common practice nationwide and has been used numerous times in Kentucky to aid in the development of trails, according to data available through the Kentucky Transportation Cabinet.

The Dawkins line was also railbanked by the Big Sandy Area Development District and then eventually the Commonwealth of Kentucky.

The state officially purchased the line from Corman in May for $500,000. The General Assembly first approved the funds for the purchase in 2006 but the sale was not finalized until this spring, said Gil Lawson, a spokesman for the Kentucky Tourism, Arts and Heritage Council.

Lawson added the state has already allocated $2.5 million in funds for development of the trail including a $500,000 coal severance grant to the Kentucky State Parks, who will manage it, as well as up to $2 million in transportation program funding from the Kentucky Transportation Cabinet. It is unclear, however, what the total cost of the project will be.

The Big Lovely trail report estimated the trail will cost approximately $2.1 million to develop and another approximately $278,000 to maintain and operate annually but Lawson said the state will do its own study in the coming months. He said there is no current timeline for the project but said a portion could be opened as early as next year.

Lovan said he believes state leadership on the issue – most notably that of First Lady Jane Beshear, an avid equestrian trail-rider who has crisscrossed the state promoting adventure tourism initiatives, has been a major component of the proposed trail moving forward. Early on, the council struggled to build a consensus of support among local officials in the various counties whose administrations have frequently changed.

“I think it’s a great thing. It just simplifies everything,” said Lovan. “The three counties have more pressing needs and it was very difficult to convince the county officials that they needed to invest in a trail when they have needs for water and sewer,” he said.

A model for economic growth

Lovan added the Dawkins Line could become a good model for to be used in developing additional Rail-Trails in the state as well as an example of the economic potential recreational trails have.

“As far as what it will do for eastern Kentucky – it is huge,” said Paintsville Tourism Director Cindy Wheat.

Wheat, Lovan, and Lawson have all said they believe the Dawkins Line has the potential to become a “premier Rails to Trail destination that could eventually draw thousands of visitors to the region each year.

“The scenery is incredible,” Lovan said, “There is so much about it that is going to attract so many people.”

The line is heavily wooded and remote in some areas but also features a pair of tunnels – the 662-foot Gun Creek tunnel and the 1,555-foot Carver tunnel, an old coal tipple and 35 trestle bridges. 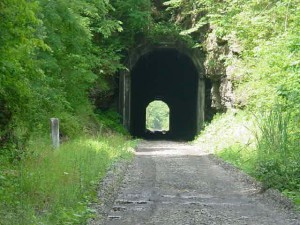 Photo courtesy of Summit Engineering. The Gun Creek Tunnel near Ivyton along the Dawkins Line Trail.

Officials have frequently compared the Dawkins Line to the well-established Virginia Creeper Trail in southeast Virginia in terms of its scenery and potential for spurring economic growth.

According to a 2004 study conducted by the U.S. Department of Agriculture, the VCT draws more than 130,000 users annually, almost half from out-of-town, injecting an estimated $1.5 million into the local economy and $2.5 million into the economy state-wide.

This his comparison does not sit well with Johnson County resident Robert O’Bryan, who lives along the trail in the community of Leander. O’Bryan points out that the Virginia Creeper Trail crosses through the exceptionally scenic Mount Rogers National Recreation Area and is joined for a section by the Appalachian Trail, the nation’s most prominent footpath.

In contrast, he said, the Dawkins Line not only bisects his property but travels within 30 feet of numerous homes, churches and businesses along its route in addition to crossing many roadways. He worries the trail will infringe on property owners rights to privacy and force them to modify their property.

“I’ve said many times if it ran through the backwoods and not close to the homes I wouldn’t oppose it at all,” O’Bryan said. He said there are more than 400 individuals who own property along the line but he does not know of a single one that supports the trail.

O’Bryan has become the de facto spokesman for the opposition. The retired educator, member of the Johnson County Soil and Water Conservation board and president of the Johnson County Farm Bureau, is well respected in the community and has written two published letters to Paintsville Herald expressing opponents’ position.

Safety along the trail is another major concern. “Park rangers will just not get the job done. It is just too much to ask of a Park Ranger – asking them to patrol something 24 hours a day, 7 days a week. When you open it up you are making it a public thru-way for anybody. Good and bad,” O’Bryan said, “I can see it being a drug trail going into Magoffin and Breathitt counties.”

He also believes the line’s trestle bridges exacerbate flooding along Jenny’s Creek. They have long trapped debris, which causes the creek to swell its banks during heavy rains, O’Bryan said. Flood damage, he added, was given by Corman in his explanation for abandoning the line.

“That is the big reason I’m opposed to it… the trestles will remain right where they are – whether or not the state will keep them clean or not they will be responsible for doing that,” he added. 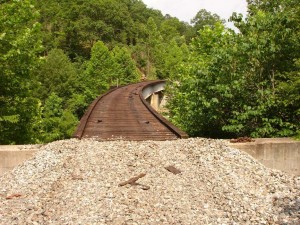 Photo courtesy of Summit Engineering. This mutli-trestle bridge along the Dawkins Line would carry users over the Narrows Branch of Jenny's Creek.

O’Bryan said a lack of communication between the state and property owners has stroked the opposition’s fury.  He also wonders if all the proper legal procedures were followed when the line was abandoned and the trail proposed.

“It would have made us feel much better if someone would have met with the property owners and let us know what was going on instead of us reading the newspaper,” he said.

He also claims the media has also not accurately portrayed the project in its coverage, and said property owners were barred from asking questions at a recent press conference attended by Governor Steve Beshear.

“The property owners have not gotten any respect at all. They are just ramming it down our throat regardless if we want it or not and that really doesn’t sit well with us,” O’Bryan said.

Wheat and Lovan said they are aware of the opposition but believe the trail will be built and in time its success will show property owners their fears were unfounded.

“I think a lot of the fear, is fear of the unknown,” said Lovan.

Wheat agreed. “I truly feel once the residents see how much this is going to enhance their property, their neighbors and the community they are going to have a change of heart.”

She said she hopes residents will eventually become involved with the Rail-Trail, perhaps building amenities such as campsites or small businesses that cater to users. “I think it is an opportunity to put our best foot forward and welcome everyone we can and make them understand what a great area we have in eastern Kentucky,” Wheat said.

Both expressed confidence in the state’s ability to address safety and environmental concerns about the trail, adding every effort will be made at Tuesday’s meeting to share information with residents.

4 comments for “Rail to Trail project considered in east Ky.”