I know that many of you are thinking about hunting as we move into November. I have been there many times. The falling of the leaves and the first signs of frost often sparks that deer hunting urge. Finding the trail where your buck is rubbing and scrapping his way during the rut is an exciting time to be in the woods. 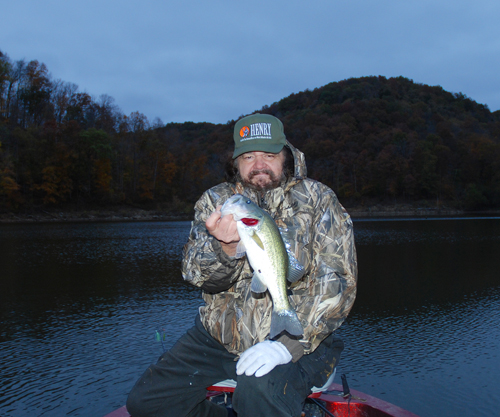 Author Chris Erwin holding the last fish caught on Cave Run Lake during the fall trip, it was a little over 15-inches caught on a deep-diving crankbait just before dark fishing the channel trees. (photo by Scott Erwin)

With all that said, I can tell you this is the time to be on the water. The traffic is thinning out, and the water temperature signals to the fish; it’s time to get ready for the long haul of winter. Cave Run Lake is only four feet from reaching winter pool. At this level, it exposes a lot of trees in the water you haven’t seen all year. For the most part, these areas don’t get fished all year, and since so many people put up their fishing rods this time of year, they may never even see them at all.
The first few days, we had a hard time locating where the fish were active, but by the last part of the trip, we had put together a pattern that was working. And it was a follows. The Muskie was on flats near bends in the river near the channel, so it was a short distance from the flats to deep water. These fish wanted something digging at the bottom. Lures like Hellbenders, long-nose crankbaits in white or shad color seem to work the best.

Our record for actually getting these fish in the boat was not good. Fishing from the pontoon boat made it more difficult to land these fish; however, we managed to hook three more over the last four days. One fish was in the high 40-inch range. It hit the lure three feet from the boat and went ballistic on the top of the water. With the dip net in the water it managed to rip free and left us just staring at each other.

The Muskie is always the big prize; however, it’s the bass fishing that makes these trips fun, and we had that pattern figured out as well. I say this because while we all want to catch a Muskie, every one of us was catching bass. The pattern for the bass was a lot different. We never caught the first bass on a flat; instead, the bass was on the channel trees. And you had to be throwing something that got down to, at least ten feet. I even caught a 20-inch catfish fishing this technique. We would throw way past the standing timber and crank our lures (crankbait) as deep as it would go and then slow the bait down as it passed the standing trees. When the fish took your bait, it was a hard moving strike; then, you had to fight the fish back to the surface. Many of these fish were hooked deep in the mouth. There was no guessing they were trying to eat it.
This fishing will continue to be active until the water gets below 50 degrees, so there is still time for you to get into some of this action.

KOPA news: For the last 12 years, the Kentucky Outdoor Press Association has been having its fall writer’s conference on Cave Run Lake. This year they had decided to move it to Yatesville Lake However, because of the growing cases of COVID19, the Press Association has decided to cancel the meeting. This meeting will be held sometime in the spring on Yatesville Lake. Each year we have a few people who want to meet the writers, and it is part of the fun of writing about the outdoors. We hope to see you all this coming spring. Maybe by then, the virus thing will be under better control. Chris Erwin is the founder and publisher of Kentucky Angling News an online magazine available at www.kentuckyangling.com/magazine Chris can be reached by email chris@ashlandbeacon.com