Every year on free fish weekend in Kentucky, Kids Fishing Derbies are held all across the state. The event has become an annual event that draws kids and their parents to these locations every year. For the last nine years, I have tried to cover the one that is put on at the Minor E. Clark Fish Hatchery. 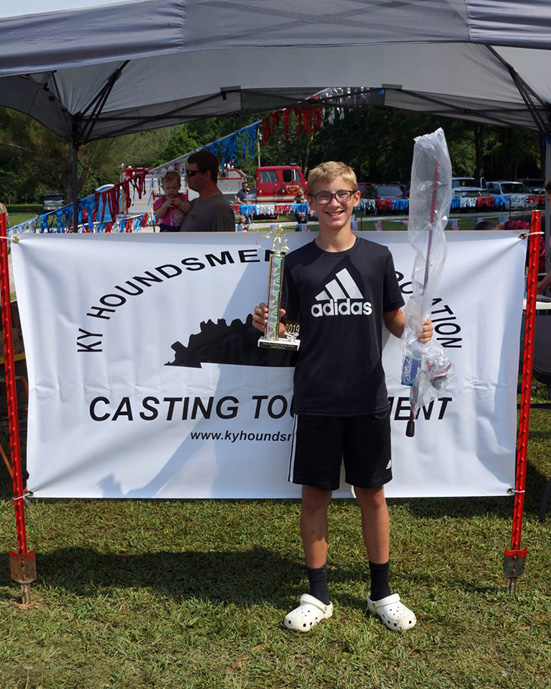 One of my passions is to introduce kids to the outdoor life that has been slowly becoming replaced by video games and social media. In my opinion, it is a poor trade-off. Nothing can replace the fresh air sunshine and the thrill of having a fish on the line.

This year was a complete success as the kids, and their parents arrive at the hatchery ready to test the waters. These ponds used by the DFWL was stocked just for this event. Catfish, bluegill, crappie, and bass were ready and waiting for the offering that these kids were about to cast into the ponds. 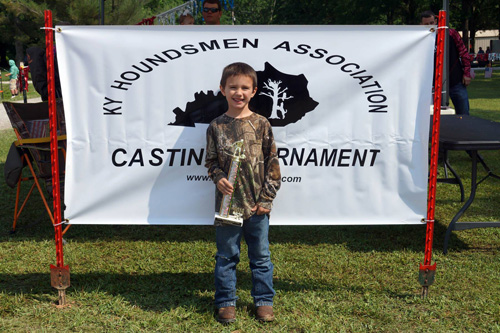 This outing was possible because of all the sponsors willing to donate money, time, and resources to make this event happen. Fish and Game officers and volunteers from groups like the Kentucky Houndsmen were just a few on the people I see there every year. Tom Timmermann, the 8th District Wildlife Biologist, was the MC as he called for contestants to gather at each event.
These included casting competition for three different age groups, names were also drawn for prizes. The party feeling included free food and drinks for the kids. They were displays from many nature groups all designed to peak interest in the outdoors. If you want to see a kid with a smile on his or her face, bring them to one of these events.
It was just minutes until the fish was flopping on the banks as the kids began to reel in their catches. Every now and then you would see a little kid with a whopper size catfish on the line it’s worth the trip just for that alone.

The Kentucky Houndsmen took their role as they have for many years as official fish cleaners. The kids and their parents stood in line as the men cleaned fish after fish as they brought them to the cleaning station. 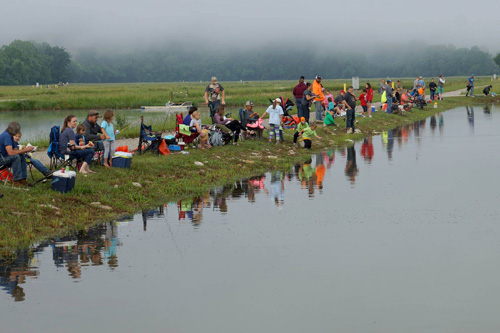 The contestants line the bank of the three ponds as the morning fog lifts and the fishing begins, 611 kids test the waters in the 2019 Kids Derby (Photo by the Kentucky Houndsmen)

They were three ponds open, and the kids and their parents surrounded all sides of each. Stringers of fish were scattered along the bank as parents help each kid add more fish to their stringer. This event is over by noon. The folding chairs, handheld coolers, fishing rods, and reels get packed up as they begin to make their way to their cars.
The total number of kids registered was 611 that is not counting parents or other adults supervising the children. It was estimated that about 1500 to 2000 people attended altogether.
Sponsors for this event and they seem to be faithful year after year are: Kentucky Fish and Wildlife, US Forest Service, US Army Corps of Engineers, Kentucky Bank ,Walmart of Morehead, Kentucky Houndsmen, Appalachian Outdoorsmen Association, Hiner’s Bakery, Frito Lay, Coke, Jennings Septic, Kentucky Silver Muskie Club, Morehead Optimist Club, Stokley’s Marine, Larry Lewis- Duck Creek Hunting Preserve, Scott’s Creek Marina, Crashes Landing, Ole Seasons Shop, and Morehead Tourism. While these events help spark an interest in kids, it’s by no means enough as we head into the middle of summer. I hope you all will consider a kids outing of your own. Each month starting five days before the full moon bluegill go on the nest. This is the perfect time to take a kid fishing. It’s comfortable, fast fishing holding their interest while letting them experience the outdoors.

Chris Erwin is the founder and publisher of Kentucky Angling News an online magazine available at www.kentuckyangling.com/magazine Chris can be reached by email chris@ashlandbeacon.com