I attended a meeting a few days ago that I hoped would add to the story of the future of the ruffed grouse (Bonasa umbellus) in Kentucky. It has been no secret that the Grouse population in this state has been in severe decline for some time.
This meet was at the Carter County Extension Office in Grayson, KY. The Main speaker was Zak Danks. He is the Grouse, Turkey program Director at the Department of Fish and Wildlife. The meeting was mostly for farmers and landowners in Carter and Greenup County. However, the programs mentioned are also available in Bell, Boyd, Breathitt, Carter, Clay, Elliott, Floyd, Greenup, Harlan, Jackson, Johnson, Knott, Knox, Laurel, Lawrence, Lee, Leslie, Letcher, Magoffin, Martin, Morgan, Owsley, Perry, Pike, Rockcastle, Whitley, and Wolfe Counties. This program is part of a mulita division of the Natural Resources Conservation Service (NRCS). While I don’t want to confuse you with a lot of acronyms, it’s necessary to understand the NRCS is the main heading with a lot of subsets that address different concerns. 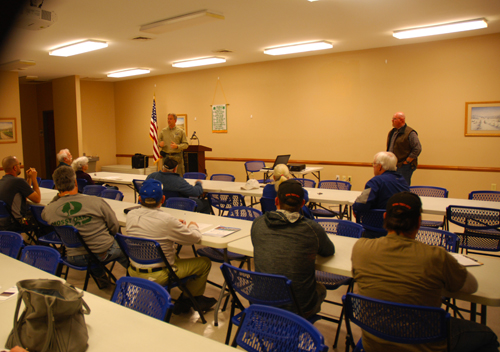 (About 30 people meet at the Carter County Extention office to explore the SEKESH program to see if farmers were interested in habitat programs that would help to support small game including the Ruffed Grouse.) (photo by Chris Erwin)

Under the NRCS there is a program for farmers to get paid to manage some or all of their farmland to improve habitat for small game, birds including Ruffled Grouse. The program is called Southeast Kentucky Early Successional Habitat Initiative (SEKESH). Under this program, farmers can get paid $225 per acre plus another $133 per acre for management guidance. Farmers must make an application to the state and develop a conservation plan. The property will be assessed and developed according to the land owner’s goals, and the best way to manage it also to meet the purposes of the program.

This land management often includes clear-cutting or lumbering old forest areas to develop future young forest areas. According to Zak Danks, the loss of our young forest areas have added to the problem of maintaining the habitat necessary to support our grouse and small game population.
So far, there have been 3,700 acres over the last seven years added to the program they hope to double that in the years to come. If you are interested in finding out more about these programs, you are urged to contact Zak Danks phone: 502-892-4544 or email: zak.danks@ky.gov.

The question remains with this bring back our grouse population? In my opinion, that is a question that can only be answered in time. However, one thing is clear without habitat; there is zero chance of any kind of Grouse recovery. Having managed habitat can only improve our chances to see a grouse come back.

It wouldn’t be honest on my part to not cover the other problems that face our grouse population. There has been a multi-State study on the Ruffled Grouse and what has caused its decline. One of the things that stands out in the study is that grouse may have been exposed to the West-Nile Virus. While grouse north of us seem to tolerate this exposure better than our area, it was documented by the blood studies that showed the West-Nile antibodies showed up more in birds located north of Kentucky. It was concluded that many of these northern birds live through the virus. To some extent, it is making them self-inoculated to the virus.

Since these birds are tough to transplant, the shock of capture usually caused delayed death. Those efforts so far have not been very successful. However, we have people like Danks that continue to work on finding ways to forge a path to the reestablish efforts to a comeback of this specie. If you are a landowner, I urge you to make contact with Danks or the department of Forestry and see if this habitat program is right for you. Chris Erwin is the founder and publisher of Kentucky Angling News an online magazine available at www.kentuckyangling.com/magazine Chris can be reached by email chris@ashlandbeacon.com