I want to say this at the beginning of the article so maybe more of you will see it. I have been trying to put together a deer story for a few weeks now. I found a 10-year old that killed a 12 point buck with a crossbow, a girl that killed two deer just outside of town with a bow, and a few others that I’m still trying to run down. For one reason or another, they didn’t pan out: however, maybe your story is the one I’ve been looking for. If you got your deer this year, let me know. 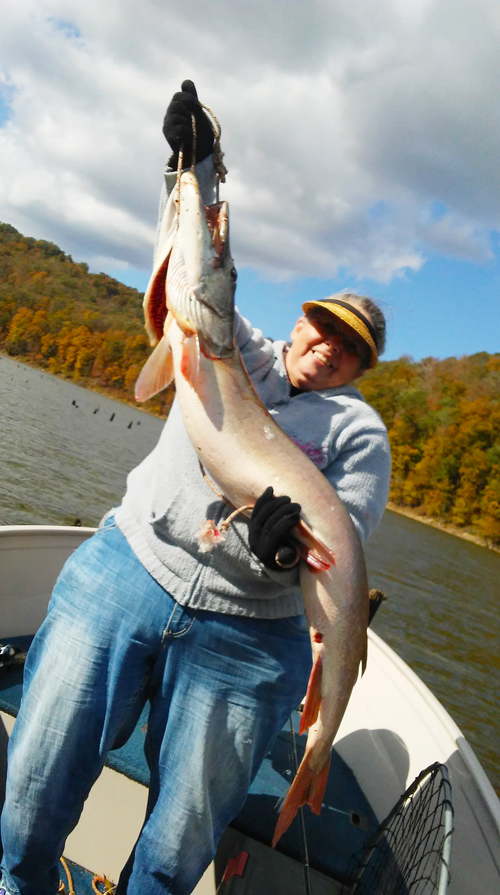 In the meantime, I discovered a new friend that lives in Greenup, Kentucky; her name is Rita Bryant, and her husband, Terry. They have been committed fishermen, and like me, they have a cabin on Cave Run Lake. They tell me they have been fishing Cave Run Lake since 1977 while their cabin is in the Longbow section of the lake it appears we do fish some of the same water.
Muskie can be a difficult fish to catch; it has been called the fish of 10,000 casts. This saying is often correct. You can go a lifetime and not catch one of these fish. When you do hook one, most first-timers lose the fish because they are not equipped with the know-how to keep them from breaking your line or just stretching out the hooks and pulling out. The more you try, and the more you learn about this fish, the better your chances become.

Rita and Terry have been perfecting their Muskie fishing abilities for a very long time. Cave Run Lake opened up to boating in 1972. I know that because it was the very first time I got on this lake. I had been fishing it from the bank before that. So the Bryant’s have been fishing this lake for 42 years.
In that amount of time, you can learn a few things. In the fall, if you have a cabin on this lake that doesn’t stay heated year-round, you must shut off your water and in my case, remove my on-demand pump, so they don’t freeze. The Bryant’s were down there to do just that, and get their cabin ready for winter. They were just getting to the lake as I was leaving. As you all know, the fish were still in deep water when I caught my Muskie.

Rita and Terry had their boat at Longbow. However, they came out of there and headed up the river toward my end. While still in the morning hours, Rita hooked her fish. She was throwing a Top-Raider surface lure. The fish slashed at the bait buckling on the surface. It’s a heart-stopping experience and thrilling at the same time. The fish didn’t stay on the surface; it drove to the bottom pounding straight down with all it had. With what seems like way too long, the fish fought against the rod.

Rita kept lifting the rod as she gained ground on the line until they could see this big girl still fighting to pull down. Terry got the net and stood ready as the fish slowing started giving up and came to the surface. Terry slipped the fish in the net and then struggled to get over the edge of the boat. This was no little fish.

While Rita has caught a lot of Muskie in her years of fishing, this was her largest that she has been able to get in the boat. They quickly measured the fish as it just topped 48 inches an excellent catch for anyone.

I hope to see Terry and Rita on the water this coming season. They are real veterans that have proved they know what they are doing. Until next time keep your line wet and take a kid fishing.