It was a beautiful day in Greenup County when the Canoers and Kayakers launched their craft in the Little Sandy River. It was right by the Raccoon Bridge on Route 2, at 9 am. Both Soc Clay and Sam Piatt were present and commented that in the last eight years, the race has been going on; the weather has never been this good. 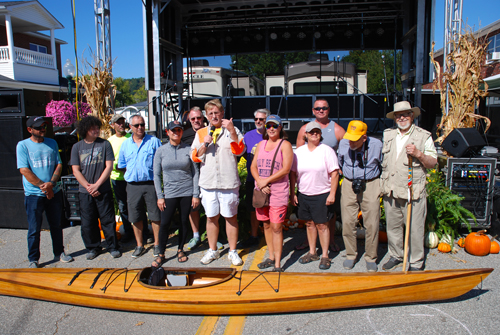 There are the winners first, second, and third place in all divisions along with Soc Clay and Sam Piatt. They were Kent Bentley, Jim Rogers, and Rick Horton, Jason Madden, Ramcie Hamah, and Joe Coaliron, Tim Tolliver, Kelly, and Bev Burton (Photo by Chris Erwin)

Once on the water, the contestants found the clear skies with no wind or much current meant they would be no help from Mother Nature. In the years past, the wind was at their back, and often the current would help carry them along. However, this year, it was going to be all muscle as they made their way down the Little Sandy River.

The 6.14 miles down the river in the past took a little more than an hour for the fastest paddlers to complete. This year that record will nearly be impossible to beat in these river conditions.
I pulled up on the Greenup boat ramp where they would be finishing the race; Tom Clay, the director, and timekeeper was stationed at the last bend where they would mark the official time of each constant. 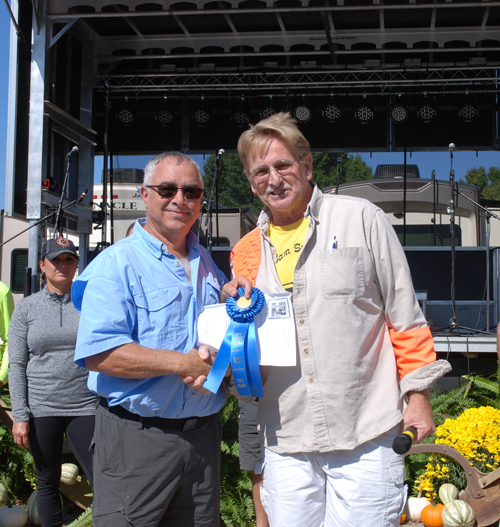 The over-all winner and with the fastest time Kent Bentley with a time of 1 hr and 13 minutes this is Bentley’s second year in a row to win this event. ( Photo by Chris Erwin)

I watched as Kent Bentley last year’s winner rounded the final bend, in his hand-made Kayak, he held the fastest time for this race at 1 hour and eight minutes last year. However, this year, he would not beat his old record as he slid over the finish line in 1 hour and 13 minutes. He would hold the fastest time this year and become the overall winner. Kent Bentley is from Greenup, Kentucky. 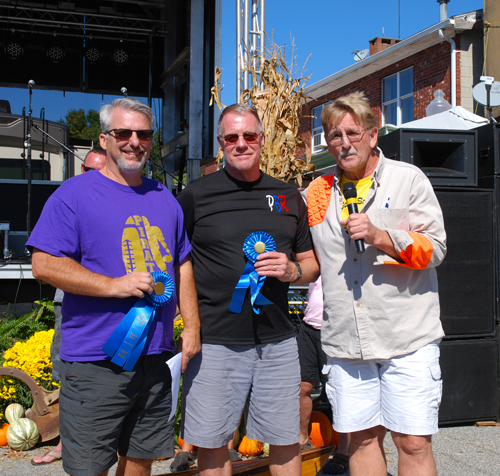 Jim Rogers and Rick Horton take first place in the canoe division with a time of 1hr and 15 minutes. (Photo by Chris Erwin)

After the race, all of the contestants would come to the main stage where Greenup County Old Fashion Days was underway. Tom Clay would MC the event and hand out the awards to all of the winners. Both Sam Piatt and Soc Clay addressed the crowd to congratulate the winners and say a few words about how they wanted this event, and others like it, to make use of our rivers and streams. Kentucky has more running water than any other state in the union except Alaska, and much of it is underutilized.

“By holding events like this one, we can highlight these small streams like Tygarts Creek, Little Sandy River and Kinniconick Creek these streams are teaming with fish and provide some of the best canoeing and Kayak water anywhere.” Soc Clay said.

I want to remind everyone the Kentucky Outdoor Press Association will be at the Scotts Creek Marina on the 11-13th of Oct. you are welcome to stop by and say hello to the outdoor communicators that you read, listen to and see on TV. They are the oldest outdoor group in Kentucky Starting in 1951. I hope to see you there. Until next time, keep your line wet and take a kid fishing. Chris Erwin is the founder and publisher of Kentucky Angling News an online magazine available at www.kentuckyangling.com/magazine Chris can be reached by email chris@ashlandbeacon.com