A few weeks ago, I wrote an article about Davy Jones and the great crappie fishing he provides through his guide service on Green River Lake. This article has awakened many of you out there and in doing so; I have had the pleasure of hearing many of your stories catching crappie across the state.

When I was talking to Greg Dowdy one of our local avid fishermen, he explained to me one of the ways he’s having good success catching large crappie on Cave Run Lake. After looking at his pictures, I felt this was a good time to pass along his method of finding and catching crappie. 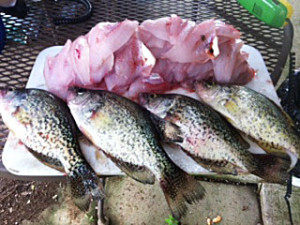 When the crappies move to shallow water, they are the easiest to find, it’s also when they are the most aggressive. This is when we hear about fisherman having great success; fishing brush piles, stake beds and other shallow-water structure as they tend to stage and begin their yearly spawn. 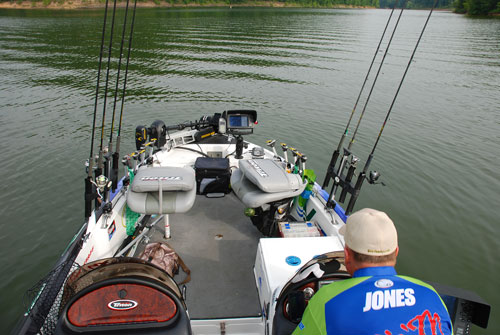 This is Davy Jones fishing rig, this is how he rigs his boat to fish using the spider rigging method photo by Chris Erwin

The middle of the summer is a different matter. The crappies have moved back out into deeper water. For many anglers, they become very elusive and hard to catch. One of the ways to catch them during this period is to fish at night under lights but Greg has discovered a day-time method which has produced even in these tough conditions.

Dowdy moves out on the edges of the grass where the deeper water is very near the weeds, he positions his boat where his side-finder option on his depthfinder is looking toward the weed edges. He looks for brush piles on the first break just off the flat near the weeds; these piles should be in 12 to 15 foot of water. The fish will be around the 12-15 foot deep brush piles during the low-light periods. He finds as it becomes later in the day the fish will move to the deeper bush piles 17 to 20 feet.

While Davy Jones was “Spider Rigging” Greg is using a single rod, once he finds a brush pile he feels is holding fish, he drops a buoy on the spot and then begins to fan cast the area using small jigs and roadrunner spinnerbaits. He points out, at this point he could go to live bait like minnows; however, he prefers to use artificial bait, and many times it will out fish live bait when the fish want to chase the bait.

When using 32 oz. or lighter baits it’s important to use four to six-pound test line along with a long rod, a seven to 12-foot rod are a common setup. These long rods have super sensitive tips and make it very easy to detect strikes even when the fish are not very aggressive.

We know that Cave Run has a better than average crappie population the hard part has always been finding them. This method provided by Dowdy should help anyone who is serious about locating and catching a good stringer of crappie even in the heat of the summer months. Till next time keep your lines tight and take a kid fishing. Chris Erwin is the founder and publisher of Kentucky Angling News an on-line magazine available at www.kentuckyangling.com/magazine Chris can be reached by email chris@ashlandbeacon.com or trimmer308@windstream.net